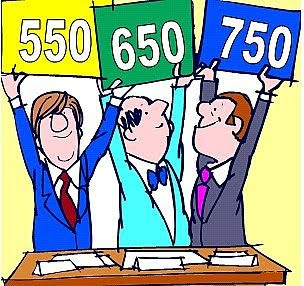 Good Credit Scores Are the Key To Financial Health

Credit scores were developed as tools to help banks and businesses make objective decisions. To generate them, a mathematical formula pulls credit report data and transforms it into a numerical rating. Fico Scores range from a low of 300 to a high of 850, and, according to Fair Isaac, the creator of the scoring system, mortgage lenders consider anything above 760 as ideal.

Despite differences in each ranking system, they have one thing in common: A higher score indicates less risk. And having high credit scores makes you more appealing to lenders, employers and landlords.

Consequently, focusing on your credit scores is only natural. "People are drawn to this subject because it allows them to measure something that they equate to financial health," says Jose Rivas, the national education manager for Consumer Credit Counseling Service of San Francisco.

That focus, however, can turn into anxiety, and conflicting information is often to blame.


Keeping the Right Mix of Credit

"Every time someone runs my credit, they say, 'Wow, I almost never see someone with credit that high,'" says Carrie Rocha of Minneapolis, the founder of the “Pocket Your Dollars” blog. She keeps her credit first-rate to preserve her autonomy.

"As someone who got out of $50,000 in debt in less than three years, I take a lot of personal pride in my financial freedom" she says.

Though Rocha has no plans to borrow money again, "I have no barriers when it comes to employment, insurance or other areas of life where my credit score is used to assess the kind of risk I am."

Besides "the obvious things like pay my bills," Rocha says she increased her scores by talking to her credit union loan officer, who said an overabundance of idle retail accounts was driving it down.

She had opened the cards randomly during in-store promotions but never really charged on them, so there was no history to protect. After formally closing the accounts, her scores that were previously in the 720 to 740 mark rose to the 800s.


Does the Perfect Credit Score Exist?

Pursuit of excellence is often wise, but does "perfect" exist? Yes, says Craig Watts, the public affairs director for Fair Isaac. "Several thousand consumers do, in fact, have the highest possible FICO score."

Though most people won't reach the credit score apex, you can get close by consistently following three simple guidelines:

• Pay all bills on time.

• Take on new credit only when you really need it.

Don't obsess over small credit score variations. "Lenders decide what score they will accept for their best-interest-rate product," assures Watts.

"They genuinely don't care if your score is 50 or 100 points higher than that."

Clearly, A-plus credit has its advantages, but there is no reason to go overboard. Find a balance between attentiveness and fixation by understanding what those numbers can do for you and knowing how you can improve them.

And remember: Credit scores gauge your borrowing history, not your value as a person.

Why Debt Settlement Is The Wrong Move

Debt settlement a 'nuclear option' that most people shouldn't even consider.

An excellent article by: Alysse Dalessandro


Complaints about debt settlement companies are on the rise - prompting warnings that dealing with those types of businesses might not the simple solution they might seem for consumers overwhelmed by debt.

Only an estimated one in 10 consumers who use these companies successfully emerge from the process, according to a recent government report.

The Better Business Bureau said it received more than 3,500 complaints from consumers on debt settlement companies since late 2007.

"The whole industry is getting a lot of attention right now because so many people are in so much financial trouble and unfortunately if they get tangled up in the wrong debt settlement company, they end up worse than they began," said Alison Southwick, BBB spokeswoman in an interview with Consumer Ally.

The Government Accountability Office recently released an investigation into debt settlement company practices and found that 17 out of 20 companies sampled impose fees on consumers before settling any of their debts - a practice that the Federal Trade Commission has proposed banning.


According to Southwick, how the process works:


1. consumers are told to stop paying their debt and instead pay into an account set up by the company.

2. The consumer pays into the account for years and then after saving a substantial amount, the debt settlement company will try to negotiate with the credit card company to accept the saved amount instead of the full debt owed.


The issue is that the credit card companies or other original creditors DO NOT have to comply with the negotiation and that is only one of the many potential problems Southwick warns.

"The problem is you haven't been paying your credit card for years, your debt is mounting, and your credit report is taking a hit and in the meantime, your credit card company can file a lawsuit with you and start garnishing your wages," Southwick said.

The BBB, a membership-based business ethics group, takes specific issue with companies making claims of debt settlement as a "simple" solution "guaranteed to work," according to Southwick.

GAO found the debt settlement companies provided information to consumers that was "fraudulent, deceptive, or questionable" including advertising success rates of the program as high as 100%, according to the investigation report.

"Debt settlement is not an easy fix and if you are going to do it, you really should only consider it before declaring bankruptcy," she said. "Its really one of those nuclear options that you do not want to enter into lightly."

Once entered into the lengthy debt settlement process, it may not be so easy to leave. Southwick cites a consumer who had paid $15,000 into a debt settlement account. When she dropped out of the process, the company refused to return the money.

According to the GAO, FTC and state investigations have shown that fewer than 10% of those entering into the process complete it.


The FTC warns consumers should avoid companies that:

* promotes this as a "new government program".

* guarantee their success of making your debt vanish.

* advise you to stop all communication with your creditors.

* say that they can stop debt related collection calls or lawsuits against you.

* require you to pay a full upfront fee.


"You should always contact your credit card company and try to work something out first with them," Southwick suggested.

"For some people, who have a little bit of credit card debt, debt settlement is really not for them."