“We’ve seen a high level of complaints, and I think some of it is collectors realizing in hard times they may have to press that much harder to get someone to pay,” the agency’s chief debt collection lawyer Tom Pahl said.

“And a lot of them are pressing,” he said.

The agency handled 180,928 complaints about debt collection agencies in 2011, making it the No. 1 industry it terms of complaints filed, the Los Angeles Times reported Monday. 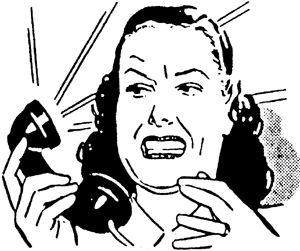 Many of those complains involve debt collection agencies not checking facts on cases they pursue.
“These folks are very aggressive,” said California state Sen. Jose Luis Correa, D-Santa Ana, who found his wages garnisheed over a debt of $4,329 allegedly owed to Sears.

Correa contends that the debt collection agency had targeted the wrong man. Furthermore, he says he was never served court papers concerning any lawsuit filed against him. The court, however, ruled in favor of the debt collection company out of default, which it is allowed to do if a defendant does not show up for the trial.

“I always pay my bills on time. Then to have somebody garnish my wages, I thought was pretty astounding,” said Correa, who had the garnishment stopped and also found the debt belonged to a different Luis Correa.

In another incident, Katie Brown of Piqua, Ohio, got a phone call from a man who said he was from a legal aid service she had called to get help regarding harassing phone calls.

But after freely divulging personal information, the man said, “‘Now let me tell you who I am,’” she said. He then revealed that he was the debt collector holding her debt.

She is suing the International Asset Group Inc. of Amherst, N.Y., accusing them of false representation and debt collection harassment.


CRA's take on this: GOOD! If collection agencies violate the Fair Debt Collection Practices Act, then they deserve to get sued! In my opinion, debt collectors are no different from evil telemarketers. They are all on big commission pay plans and whose only goal is to extract money from the people that they are collecting from.

They will get judgements on people without "irrefutable" proof that the debt actually belongs to them, not someone with the same name.They will put accounts in the "unpaid collections" column on peoples credit reports with absolutely no proof of the legitimacy of the debt.

CRA is a total credit improvement company - Not just a credit repair company.

If the collection account is on a credit report legitimately, then we need to deal with it. A client in our program will have access to negotiators with years of experience in settling debts. Many times a debt is settled after obtaining leverage over the collection agency by their repeated violations of the FDCPA.

We also have access to a legal team who is paid when they win a case - not by the client.

Good Article: The Credit Score That You See is NOT the Same as Lenders See
4 comments: