The Credit Bureaus "Rise to Power" 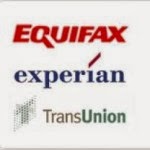 The vast majority of Americans have to obtain a loan to purchase a new car or home. During this process, the lender will order a copy of one or all of your three credit reports to make either a lending or an adverse action decision to the request. The interest rate or fees that you will have to pay on these loans may be directly related to how you have handled your credit.

History of the Credit Bureaus

As far as back as the 1860s we can find traces of the origins of credit bureaus. Local merchants would share and maintain lists of individuals who were high credit risks. That allowed them to offer more credit to people who weren’t on the lists, whereas previously, most merchants only extended credit to people they knew personally.

Later on as populations became more mobile and a wider group of merchants across the country needed information to help determine the creditworthiness of individuals, credit bureaus as we know them today began to materialize.

What Are the Three Credit Bureaus?

Over the years, as the number of people seeking credit grew, the ability to find consolidated credit reporting information took on added importance. Today, some 2 billion data points are entered every month into credit records in the U.S, and approximately 1 billion credit cards are actively being used in the U.S. That’s a lot of data!

There are literally thousands of small credit bureaus doing business today. Most are just resellers of data from the "Big Three": Equifax, Experian and Transunion .  Let’s take a brief look at their history.

Equifax was founded way back in 1899 as the Retail Credit Company. They grew at a furious pace and had offices throughout North America by the 1920s. By the 1960s, they had credit information for millions of Americans on file, and weren’t afraid to share it with whoever wanted to pay them for it.

The passage of the Fair Credit Reporting Act of 1970 placed some limits on what information could be shared with who, as well as put laws in place to govern the credit industry and protect consumers. Retail Credit Company suffered a bit of an image problem, but by 1975 they had successfully re-branded as Equifax.

TransUnion was the second of the Big Three to come along. Founded in 1968 as the holding company of Union Tank Car, a rail transportation equipment company, TransUnion jumped into the credit sphere in 1969 when they began acquiring regional and major city credit bureaus. They’ve grown over the years to the point where they now have over 250 offices across the U.S., as well as in 24 other countries.

Experian is the latecomer to the Big Three. They were founded in 1980 in England as CCN Systems. They expanded to the United States in 1996 by acquiring a company called TRW Information Services. They’ve continued to grow their operations to 4 main geographic regions, employing 15,000 people working in 41 countries.

Here is a short video containing some very interesting facts about Experian:

Credit from here and beyond...

Call a specialist today for a free credit consultation.


Next Article: How Student Loan Debt Factors Into your Credit Score: 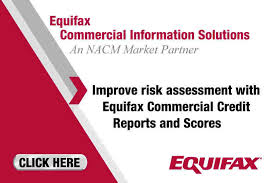 How Student Loan Debt Factors Into your Credit Score:

FCRA Lawsuits Way up. Why?
No comments:

How Student Loan Debt Factors into Your FICO® Score

This year’s summer break may be a bit more stressful if you are a college student who plans on taking out subsidized federal student loans to help pay for upcoming tuition.  Unless Congress takes action this summer to restore lower rates, new student loans will have interest rates twice what they were in the spring semester (3.4 percent to 6.8 percent).  You don’t need to be a math major to know this is not good news.

This difference in interest rates will increase the total amount of money you end up investing in your education.  And it will likely impact a lot of US consumers.

With education costs rapidly outpacing inflation, more students and their parents are taking out student loans to pay for education. Based on recent FICO research looking at a large data sample from one of the credit bureaus, we found that 6.2% of US consumers had two or more open student loans on their credit report in 2005. By 2012, that number grew to roughly 11.8%.

Consumers also have a greater amount of student loan debt today. In 2005, consumers with an open student loan on file had an average student loan debt of $17,233. In 2012, that number increased 54% to $26,530. This has outpaced growth for other types of debt, as the chart below shows. 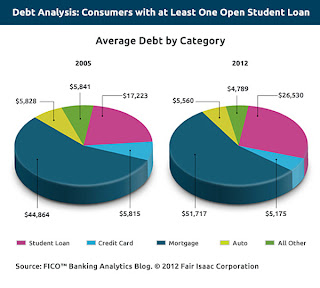 So what does all this mean for your FICO Score?

While this increase in interest rate has no direct effect on a FICO® Score (as interest rate information is not captured on the credit report and not considered by the score), it is important to understand that how you manage your student loan debt does have an effect on the score.

Let me set the record straight on exactly how student loan credit is factored into the FICO® Score:


It’s important to understand that while student loan debt can factor into the FICO® Score, revolving debt (like credit cards) has a larger influence. That’s because we’ve found that revolving type indebtedness has a stronger statistical correlation with future borrower performance than installment loan indebtedness.

While you have limited control over what happens “inside the Capital Beltway”, you do have control over how you manage your finances, and improve your knowledge of what drives your FICO® Score, which can influence your access to affordable credit options.  That’s a lesson we can all benefit from understanding!

Good luck to all students getting ready for the fall semester.

Tom Quinn is the Vice President of Business Development for myFICO, and has over 20 years of experience working with consumers, regulators and lenders and regarding credit related questions and initiatives.


Next Article:
How Employment Credit Checks Keep Applicants From Getting the Job

FCRA Lawsuits Way up. Why?

How Employment Credit Checks Keep Qualified Applicants From Getting the Job

FCRA Lawsuits Way up. Why?
2 comments: