I tell all my clients all the time that I am the "Debt Collector Terrorist". This is because a large part of my credit improvement program is getting on the phone with collection agencies, banks, finance companies and debt collectors to make them violate the Fair Debt Collection Practices Act. This forces them to "cease debt collection activities" and work out a settlement or cancellation of the debt.

In the Richmond Times Dispatch last week, I heard about the NACA event coming to the Richmond Convention Center for four days. They were coming to Richmond to help homeowners who are in risk of losing their homes work with the banks to find a solution to help them to avoid foreclosure. I was intrigued with the concept. Especially because of how big the movement was and the size of the venue they were leasing. . 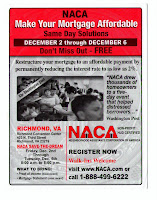 I immediately thought that this company could offer help to some of my clients at Credit Restoration Associates, so I started researching the company.

The first thing that got my attention was their CEO, Bruce Marks. He started the concept for NACA when he was a Union Activist. This evolved into his work as the Executive Director of the Union Neighborhood Assistance Corporation (UNAC) and was one of the first to expose predatory lending and it's devastating impact and the main reason we are in the housing mess to begin with.

What Bruce started doing was make the lives of bank executives a "living hell" unless they started helping the very consumers that they took advantage of. Yes - a percentage of those people should not have been given the loans, but due to predatory lending practices, they WERE given the loans. The banks made out like fat cats when the homeowner is stuck with no other option except foreclosure.

I read where Bruce Marks had been called an "urban terrorist" who went to a speech of the president of Fleet Bank, CEO Terrence Murray, at Harvard University, disrupted the speech and made this man's life miserable for four long years. Eventually, the bank caved and started modifying the loans and help the people stay in their homes.

Bruce's tactics sound like an extreme version of what I do to the debt collectors and collection agencies (the evil side of telemarketing). It actually inspired me to a large degree. Watch out debt collectors... so I had to go and see this event for myself. Here is a cell phone video clip of the event.

I wanted to meet Bruce Marks, but he was hosting the same event happening simultaneously in Charlotte, NC.  Kindred souls will just have to meet another day.

The reason I wrote this post and am endorsing NACA is mainly because of the research done on the company and on Bruce Marks. Do some research yourself at: www. NACA.com.

Please feel free to call Credit Restoration Associates at (800) 648-5157 for all questions relating to NACA and home foreclosure. We will always guide you in the right direction. We are the only legal and bonded credit repair company in Richmond, so you know that we are the only legitimate company you will talk with. Our office is on southside in the Boulders Office Complex next to Chippenham Hospital. Call us today and schedule a FREE credit consultation!

NEXT POST: A Credit Score That Tracks You More Closely Than You Think ...

A Credit Score That Tracks You More Closely 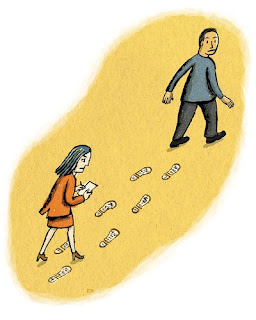 By: Tara Siegel Bernard
Anyone who has recently applied for a mortgage knows that lenders are already looking much more closely at your financial affairs. But soon, they’ll be able to easily delve into the deepest recesses of your financial life, accessing information that never before appeared on your credit report.


This week, a company called CoreLogic introduced a new type of credit file, which is based on the giant repository of consumer data it maintains on just about everything that most of the traditional credit bureaus do not: missed rental payments that have gone into collection, any evictions or child support judgments, as well as any applications for payday loans, along with your repayment history.
The new report also includes any property tax liens and whether you’ve fallen behind on your homeowner’s association dues. It may reflect that you now owe more than your house is worth or if you own any other real estate properties outright. It also is supposed to catch mortgages made by smaller lenders that the big credit bureaus may have missed.

The idea, CoreLogic says, is to provide lenders with more details about prospective borrowers, supplementing what they already know through the more traditional credit reports furnished by the big three credit bureaus, Equifax, Experian and TransUnion. Moreover, CoreLogic has formed a partnership with FICO — the provider of one of the most popular credit scores used by lenders — which will formulate a new consumer score based on the new data.

Perhaps it’s not surprising that a company decided to pull together this information, since much of it is already publicly available. But because it comes on top of all the other information that’s being collected about you — your exact location at every minute, where you’ve been on the Web — you can’t help but feel that some of these companies know more about your activities than your spouse.
While the CoreScore credit report became available to all types of lenders on Wednesday, the actual score, which will be ready in March, is being created specifically for mortgage and home equity lenders, though it could eventually be developed for other types of credit.

For many consumers, the files are likely to reveal black marks that previously went undetected, which may damage an otherwise clean record. But the companies contend that it works both ways: The added information could help consumers with thin credit files by illustrating positive behaviors elsewhere, say making timely rent payments.

So why now? Clearly, the two companies saw a business opportunity. Lenders, who just a few years back looked the other way, remain particularly skittish about mortgage lending and are looking for more information about prospective borrowers’ ability to pay their debts.

“Lending is very constrained and origination volumes need to grow to make for a profitable mortgage business,” said Joanne Gaskin, director of product management global scoring at FICO. “So lenders are looking for ways to expand, but to expand safely.”

An estimated 100 million American consumers will have a CoreScore credit report, while more than 200 million people have traditional reports from the big three bureaus. Though the new information can influence a lender’s decision, the new score isn’t replacing the classic scores used in the automated mortgage underwriting systems kept by Fannie Mae, Freddie Mac or the Federal Housing Administration, which buy or back the vast majority of mortgages (though CoreLogic said it has let the agencies know what it is doing). But the added information may sway a lender to charge you more (or less) in interest on a mortgage. Lenders of all stripes, including auto lenders, have access to the reports, and they will be marketed to employers and insurers, too.

Ms. Gaskin said that FICO was still tweaking the credit score’s formula. But the next step is to build something that will try to get even deeper inside your financial mind: The company plans to create a more sophisticated tool that will predict how you might behave under different loan terms.

Read the rest of the article HERE


Six Ways To Beat Late Fees - That EVERYBODY Needs To Know