Identity theft can be both frustrating and costly for the victims. Reporter Stacey Vanek-Smith visits one couple who is still trying to put their credit back together after eight years of identity theft. 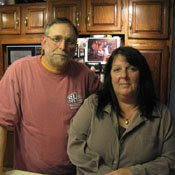 Susan and David Litchfield in their home in Norwell, Mass.

One thing I'm confident no one imagined in the buildup to a culture of borrowers is that one day a stranger would be able to convince debt issuers that they are you, with a simple computer keystroke.

The wide availability of credit has made it easy for thieves to perfect the criminal art of identity theft.

And that means you could be on the hook for bank loans, car loans and credit cards you don't even own.

Once your credit is destroyed, fixing it comes at a high price of its own. Stacey Vanek-Smith reports.

David Litchfield: He got a whole pile of credit cards. He'd use one, maxed it out and then go to another one.

Litchfield and his wife, Susan, didn't discover the problem until months later, when their daughter's student loan was refused.

By then, they were sitting on thousands of dollars in overdue bills and David's credit score was in ruins. It took more than two years to repair David's credit. But it looked like the identity thief had been stopped until...

Susan Litchfield: We went to refinance the house and the bank called me. And I just started crying and I said, don't tell me he's done it again? And he goes, "Oh Sue it's a mess. Wait until you see it."

Susan Litchfield produces a stack of settlement offers, collection notices and credit reports, all linked to David Leighton. He had racked up more than $200,000 in debt, and it was all there, on the Litchfield's credit report.

Susan Litchfield: Credit cards, Capital One, Chase, student loans. He had a $98,000 debt for, what we believe was child support.

ID thieves often strike the same victim more than once says Jay Foley, Executive Director of the ID Theft Resource Center. He says ID theft is hard to prove, the cases almost never got to court and the criminals know this.

Jay Foley: At the same time that we're dealing with issue A and B. The bad guys over here are creating E, F and G for us.

The Litchfield's have put a stop on their credit, but they're worried David Leighton might be sitting on a stockpile credit cards tied to their accounts -- cards he got back when credit was easy.

In the meantime, they're still trying to clean up their credit score.

And that can be an epic undertaking, says Foley, of the ID Theft Resource Center. He says every company where a fraudulent purchase was made has to be contacted via certified mail, each one has to call off its collections agency, ask the credit bureaus to remove the black mark, and open its accounts to police. Companies often push back so they don't have to cover the damages. Foley says victims should prepare for a fight.

Foley: Well they can expect to be grilled repeatedly, and if there's anything that you say during that process that is ambiguous, they are going to jump on that as the excuse for holding you responsible for the account.

Foley says it usually takes between six months and two years to correct problems on a credit report.

Susan Litchfield says the mess is so big this time, she and her husband have basically given up.

Susan Litchfield: They just bounce you around until, after an hour of waiting on the phone, you just hang up. Then I get into bed, my head's spinning, I want to cry, I just get so angry. I got to the point where my blood pressure was sky-high, my doctor was afraid I was going to have a stroke. I just put it all away. I just couldn't deal with it.

The credit bureaus don't make things any easier, says Bob Sullivan, author of "Your Evil Twin: Behind the ID Theft Epidemic." He says the three agencies that determine your credit score have no incentive to move quickly.

Bob Sullivan: The credit bureaus have one customer and one customer only, and it's not us - It's the banks. It's the people who lend money.

And lenders are in no rush to see your credit score improve -- the lower your score, the more they can charge you to borrow.

The Litchfields have seen the interest rates on their credit cards jump and the premium rise for their homeowner's insurance. And now David's credit score is so low, he can't even get a card on his own.

David Litchfield: I have a credit card I share with my daughter. Somehow she got me a credit card. It has my name on it but it, but it's hers and mine.

About ten million Americans have their identities stolen every year. But there are ways to minimize the damage says Lucy Duni. She's with TransUnion, one of the three major credit agencies.

Lucy Duni: Place a fraud alert on your credit report. You could also place a credit freeze, so no new accounts can be opened in your name.

Duni recommends being stingy with your social security number and shredding personal documents. ID theft is getting harder, thanks in part to the credit crisis, which has made banks put stricter lending standards in place, says author Bob Sullivan. He blames the era of easy credit for the ID theft boom. He says banks were more than happy to hand out plastic to almost anyone, with very little verification.

Sullivan: A couple of years ago, you could walk into a Circuit City and walk out with a $3,000 television set five minutes later, even if you had nothing in your pockets. That's the reality of where we were and we created this system that made things very easy for identity thieves.