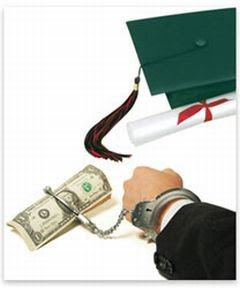 The New York Times reports on the sad tale of Robert Bowman, a law school graduate whose application for admission to the New York bar was rejected -- because he had too much student loan debt and had a history of missed payments.

He was recommended for approval by the applications review committee but that decision was reversed by a panel of five state appellate judges: "Applicant has not made any substantial payments on the loans," the judges wrote. "Applicant has not presently established the character and general fitness requisite for an attorney and counselor-at-law."

With more than $400,000 in student loans and accumulated interest, the judges apparently felt he had not demonstrated the judgment worthy of practicing law in New York.

While there is a good amount of not entirely unfair righteous indignation over the outcome of this case so far, Mr. Bowman's bizarre borrowing record does raise an eyebrow and, to be honest, you do have to question his judgment. Mr. Bowman had not made a single payment on his student loans in the 26 years since he began taking them out.

The irony of course is that without the ability to practice law, Bowman will have virtually no prayer of getting his financial life in order.

But here's the good news for Sallie Mae: Student loans can't be discharged in bankruptcy, and Social Security benefits can be garnished to make payments on loans that are in default. And the more penalties he racks up, the more money, ultimately, they'll collect.

Mr. Bowman's life may be ruined in every meaningful way, but the party has just begun for the lenders.

CRA - this is such a shame, but an unfortunate reality in the world that we live in. Mr Bowman might need to call Lexington Law Firm

to repair his credit - if not apply for a job.